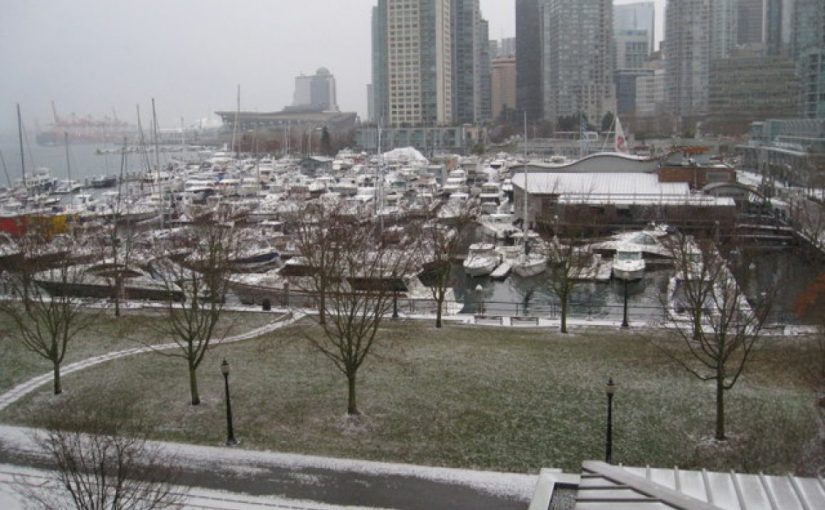 Based on my previous visit to Canada, I was looking forward to this visit in December, first to the Global Speakers Summit,a conference in Vancouver, followed by (part 2) a holiday in Panorama mountain village in the Rockies in British Columbia, via Calgary and Banff.

I have written before and talked endlessly about my previous brilliant experience in Calgary at The Sheraton Suites Hotel at Eau Claire Calgary, and I could not visit Canada without revisiting the Eau Claire to see if anything had changed, hoping that it would not be a bad omen visiting on Friday 13th.

First I arrived in Vancouver for the GSS2013 held at The Westin Bayshore Hotel overlooking Vancouver bay – and what a view it was . The Hotel was great – a friendly greeting and confirmation that the hotel wifi would be complimentary in the room as I was part of the conference – what a good start.

One of the ways I tend to judge a hotel is the way their team members look at me and engage with me – not one failed to look me in the eye, smile and exchange pleasantries, whether front of house, concierge, housekeeping or bar and catering team – super hotel, and I am happy to highly recommend it. Westin are known for their “heavenly beds”and they were big and comfortable. They are also part of the Sheraton Hotel Chain so I was interested to compare my visit to Calgary. I have stayed at Sheratons around the world, and very regularly in London, and I know those experiences do not compare to the service experience previously offered in Canada, and that is still the same in my opinion.

What about other experiences in Vancouver? We (me, my wife Nadine and Eilidh and Jay Milnes) enjoyed biking around Stanley Park and the hirers enjoyed the opportunity to banter with us and look after us but our better experience was a“local resident” who went out of his way to check with us if there was any particular view we were after. We explained we would love a cup of tea during the ride so he recommended a “tea shop” but before we got there he appeared again to apologise they were closed before we climbed up a steep hill from the shoreline. Maybe we were lucky or was it culture?

After our bike ride we stopped at a restaurant called “White Spot” on Cordera Ave. for a cup of tea. First we took over a table and then moved to another booth near a fire on the other side of the restaurant.  When we finished we went to pay – the manager then surprised us and said “You only had 3 coffees and a coke? Have them on us – Happy Christmas”  WOW! To say we were “gobsmacked” was an understatement (see the conversation in our linkedin group “Standing out from the Crowd”) – so were we lucky or is it Canadian Culture?

One evening we went with friends from Vancouver (Jenny and Rich Sagan) to a small restaurant called Lily Mae’s in Powell Street in Gas Town in Vancouver – well the owner could not have been more attentive so much so I thought he was going to have a heart attack panting up and down the stairs to check we were enjoying our dinner – lucky or culture?

I am comparing my experiences with what I generally experience in UK.

Finally at Vancouver airport where I had to pay more for an extra suitcase, the assistant at the check in counter could not have tried harder to get me paying $20 for the case on an internal flight instead of the $70 I was being stuffed with because I was transiting between international flights – alas she was unsuccessful with Air Canada’s regulations but I loved her concern about how unfair it was.