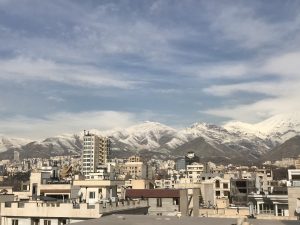 Iran is such an interesting place with some amazing people

In February I will be visiting Tehran again, having previously made a visit in 2007 with fellow speaker Paul Bridle. This time, I am speaking at several interesting venues, including their fantastic new International Conference Centre which will host over 700 delegates.

“But Michael, why are you taking your life in your hands?” is a comment that is often made to me. Understandable, if your only knowledge of Iran is what you hear about on radio and television.

However, my last visit was an amazing week, where I met some tremendously interesting business people and members of the public who are extremely proud of their heritage. After all, Persia was one of the bedrocks of early civilisation.

Yes they are suffering in many respects from all the sanctions from the west but they have a flourishing black market and are extremely resilient, as you can imagine from such a proud country. And just like in the west, the extremists are not a majority, and life in Tehran is frenetic and fast, with a social society who go out in big numbers to restaurants to meet and talk.

I was invited to the home of a local business entrepreneur and met his wife and son – and was even taken to their local riding club. Since that visit I have kept in regular contact with Javad, and hope to see him again in February.

Everyone was so warm and welcoming and eager to exchange views and learn about our country. My ignorance about their culture and even the general Muslim culture was exposed when I had explained to me several times the similarity of the teachings in the Bible and the Koran. They knew so much about the Bible and yet I knew little about the Koran.

This Christmas, Channel 4 was criticised for allowing the Iranian Prime Minister to send an alternative greeting to the West. I saw the highlights in the news but did not bother to watch the full address. This would have been exactly the same behaviour as the majority of people in Tehran.

What I am saying is that most of us in life have little control or influence over our leaders, but this does not make us bad, evil, radical or any of the many other descriptions that could be applied to any of us in UK. And yet, to many in the west, Iranians are categorised as I have just said.

No it is back to what has been said so often in the past – it is not the cards we are dealt with in life that matters ….. it is how we play that hand of cards!

Despite the fact we have little influence on our leaders, we have to get on and make the most of our lives, whether we are in Iran or the west. So it is wih Javad the Chairman and owner of Golnaz, and also Sepehr Tarverdian the managing director of Hamayesh Farazan, the conference organisers who are arranging this big two day International Management Conference.

Sepehr, despite the tragic loss of Majid Nekoodast his chairman and close friend last year, has continued to build international connections for his business.

Despite the sanctions affecting Iran, he has got on and continued to build his business, rather than taking the safe route of working as an interpreter for politicians and government officials.

He has made plans for his future and , despite all the various hurdles in his way, he is working hard and making these plans happen for him.

And so it with all of us, despite the undoubted problems we are all faced with as a result of the credit crunch throughout the world, we must keep planning our way ahead, and take control of our destiny and make things happen.

I look forward to telling you all about this next visit to Iran in a few weeks time.